Erasmus+ family back together

Toni surprised us all by inviting us to an online gathering to mark the anniversary of the last student exchange in the project “Small step for film, and big one for European citizenship”

The evening before European Day (commemorated on 9 May), a part of the team (22 students and teachers) of our former Erasmus+ project “Small step for film and big one for European citizenship”, gathered for the video meeting.  The encounter was initiated by a Spanish student Juan Antonio Villegas Nieto   or Toni, as we call him.

It was nice to see the faces from Italy, Poland, and Spain that I had the opportunity to hang out with live last year. Of course, the video socializing is not the same as socializing in real life, at moments the conversation did not flow quite smoothly, but we still understood and recalled memories of the days spent together on our exchanges.

As before in exchanges, teacher Giuseppe made us laugh again. This time with a protective mask on his face, with which he appeared at the beginning of the meeting.

His colleague, a headmistress Francesca, mentioned that now in this age of online teaching, they find very useful all the knowledge about digital tools we learned about during our previous project. At our video meeting, a Spanish coordinator Sara joined with her few month-old daughter. She informed us that in Spain the complex situation still remains and that residents can not yet go out when they want, but must respect the time specified for each group of residents (elderly, children…) and depending on the activities they wish to perform (e.g. pet walking…).

A Polish coordinator Jolanta, who has been working in England since this school year, was replaced by her colleague Renata. Renata has a desire to learn Spanish, so she showed us a book that is waiting on her to learn Spanish. Maybe it will be useful for her for a new Erasmus+ exchange in Spain. A Croatian EFL teacher Martina said she is ready for the exchange because she knows some Spanish. Perhaps some students from our school could also find useful to learn a few Spanish words, as yesterday they agreed that they will meet up during the exchange as part of the current project “Young journalist…” with Toni and some other colleagues from the previous Erasmus+ team. In March, a visit to the Spanish city of Cuidad Real, which is only 50km away from Manzanares, was planned as part of the new Erasmus+ project. Too bad I won’t be a student of this school.

In the second part of the video of the meeting, the teachers left the chat and it was just us students. The chat coordinator was of course Toni, with the support of Angela, Arianna, Konrad, Karla… Some of us were a little shy and didn’t talk, but that’s why we were very amused by those who spoke.

There were a few funny moments because our coordinator and librarian Stojanka left her laptop on in the call because otherwise everything would have stopped. But she forgot to turn off the speaker, so we heard everything she said while on the terrace. At one point, her husband walked into the room and walked past the laptop in front of the camera, which we all laughed at.

I am glad that I was part of this project and that a year after the project was completed, we heard and saw each other again. It’s a sign that we’ve all connected through this project and become one big Erasmus+ family. /Paola Tukša, 8th a; photo:  P. T. and S.L./

Original article is available in the school digital magazine KLINČEK

“The last step”- video report about students exchange in Italy

Film “Small step for film, a big one for Eruopean citizenship” 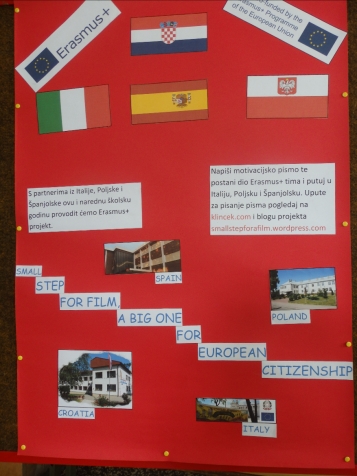 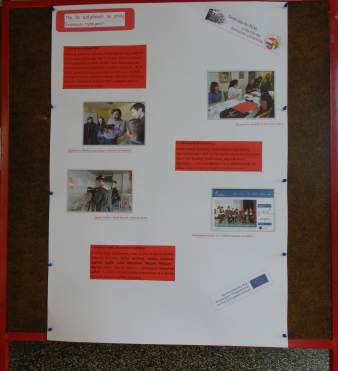